Lova-Li Wretman boxes out her opponent, times her leap to snag the disc and plants her feet in the end zone to close out the first half.

Francika Gurung spins the disc at least 20 yards for Ariel Felcan, who tip-toes the sideline for a one-handed grab and another goal.

Maya Standard, after setting up six teammates, tallies her first goal on the night, the clinching point in the Burlington girls’ 15-5 win over Champlain Valley at Buck Hard Field on Wednesday.

At Burlington, and elsewhere around the state, Ultimate has arrived. In its second year as a sanctioned varsity sport — 2020 was wiped out by the COVID-19 pandemic — there are currently 16 boys teams and seven girls programs in the state, according to Bob Johnson, the associate executive director of the Vermont Principals’ Association.

“I think it’s been building and having it turn varsity has been huge,” Burlington coach Karen Spach said. “It’s made it feel more legitimate, everyone gets field space — we got the turf.

“In the four or five years I’ve been working here with the team, we’ve doubled in the number of players.”

But what is Ultimate? How is it played? It’s not as simple as “tossing a frisbee” with friends in the park.

“I feel like that’s a popular misconception of Ultimate,” Felcan said. “Once I started playing and realizing there are positions, there’s an offense and defense, there are rules — it became more of a sport.”

Recently, BHS co-coach Sam Callison had to explain to a co-worker the ins and outs of Ultimate. He did so by incorporating other sports.

“There are end zones, just like in football. You have a pivot foot, just like in basketball, so you can’t run with the (disc). And field movement is more like soccer, trying to find open space,” Callison said.

The game is played on a 110-by-40-yard regulation field — each end zone is 20 yards deep. There are seven players to a team; player positions are defined as cutters or handlers.

“Typically, better throwers and more seasoned players are usually the handlers — they are the ones who you turn to if there are no cuts coming up field,” Felcan said. “Cutters are super-fast but don’t always have the best throws.”

Strategy is involved, too. Teams have designed plays when they are close to the end zone. In Wednesday’s game, Burlington turned to a zone defense to combat CVU’s attack.

The Seahorses, with a batch of veterans, also found a groove with their offense.

“One of our focuses has been continuing momentum down the field and having a good in-cut followed by another in-cut and another and working the disc down the field,” Callison said. “I would say we scored a few goals like that (Wednesday).”

Even in a flow-flowing style, such precision can’t be attained without chemistry.

“There’s definitely a lot of verbal and non-verbal communication,” Standard said. “We can pump-fake with the disc, which means clear out. There’s a lot of talking during the game.”

What are the rules in Ultimate?

Here are some of the key rules for Ultimate:

► Scoring: A player must pass to a teammate who catches the disc — the preferred word over frisbee — in the opposing end zone for a point or goal.

► Game length: 90 minutes or when a team reaches 15 points with a margin of 2 or more points over an opponent. According to the VPA, “once 90 minutes has elapsed and after the current scoring attempt is completed, if the score is tied, play continues until one additional goal is scored.”Get the Let’s Solve This newsletter in your inbox.

Community based solutions around child-care during the Covid-19 era.Delivery: weeklyYour Email

► Halftime: Play is stopped for intermission when a team scores 8 points or when the 45-minute mark is reached. Halftime break is 10 minutes (but the game clock remains running).

► Possession change: Passes not caught — due to a drop, block, interception or out of bounds — signals a change of possession. Additionally, the defense takes possession when a player holds the disc without passing following a 10 count.

► Substitutions: Can only be made after a point is scored or because of injury.

► Self-officiated: Players call their own fouls and settle disputes on the field (with coaches’ help if needed).

“Players are responsible for knowing the rules and calling out fouls themselves, “Felcan said. “You really get to know the game when you are playing it.”

But that doesn’t make the sport any less competitive.

“It takes a lot for a high school athlete who wants to win and be the best to do that and take a step back and say, ‘Oh, I fouled you there,” Callison said. “It’s a real testament to them.”

Said Standard: “We are very competitive but it’s also about sportsmanship and spirit of the game.” 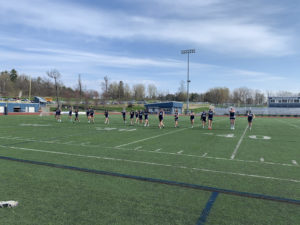